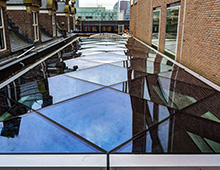 In 1916 the foundation stone was laid for the head office of the Batavian Petroleum Company (BPM), one of Shell's forerunners. A stately office building erected at the Carel van Bylandtlaan 30 that, in terms of style, evoked memories of Dutch architecture from the 16th and 17th century. Although the classic façade suggested otherwise, the interior of the office was ultramodern for that time.

In 2020 the complex, now Shell's head office, will undergo a large-scale renovation led by main contractor De Vries and Verburg Bouw. Just like a century ago, this renovation will bridge the gap between old and new.

As part of the renovation, Octatube has been invited to cover one of the monumental courtyards with a gridshell dome canopy. A challenging task in engineering, construction, production and assembly. For instance, we cannot transfer horizontal forces perpendicular to the perimeter of the courtyard. Introducing an integral, multidisciplinary way of working in an early stage enables us to meet these challenges.

Geometry
Every part and angle in this gridshell dome is unique, we determined the geometry using parametric design. We applied the same principle as for the Diamond Exchange in Amsterdam. We were able to re-use the knowledge and experience gained from that project for the C30 building.

The dome consists of a double curved steel grid of approximately 30x30 meters. The grid will be covered with cold twisted glass panels, each panel a unique parallelogram. Using Grasshopper we tried to keep the torsion as small as possible. Simultaneously we wanted to keep the glass panels as large as possible, facilitating ultimate daylight and transparency in the courtyard.

File-to-factory
The steel construction consists of an edge beam of rectangular profiles in between which a grid of light profiles forms the curved roof. Each profile has a different length and angle.

For this reason we also implemented a file-to-factory method, just like in the Diamond Exchange project. By means of a script the data of the profiles was sent to the laser cutter. The cut of the unique angles could be set exactly and weld pre-cuttings were included as well. Laser cutting, as opposed to sawing, guarantees correct dimensions and ultimately results in a more efficient and swift construction.

Prefabrication
It has our preference to prefabricate a roof that consists of so many unique parts. Iris Rombouts, project manager: “Prefabrication enables us to keep a close eye on the dimensions and it gives us an insight into any deformations that could play a critical role in the assembly. The structure is divided into several ladder frames, which we produce in our factory in Delft”. Iris: “We invested a lot of time in the production, it’s real craftsmanship. Ultimately, we ensure that the construction fits together exactly on site.” 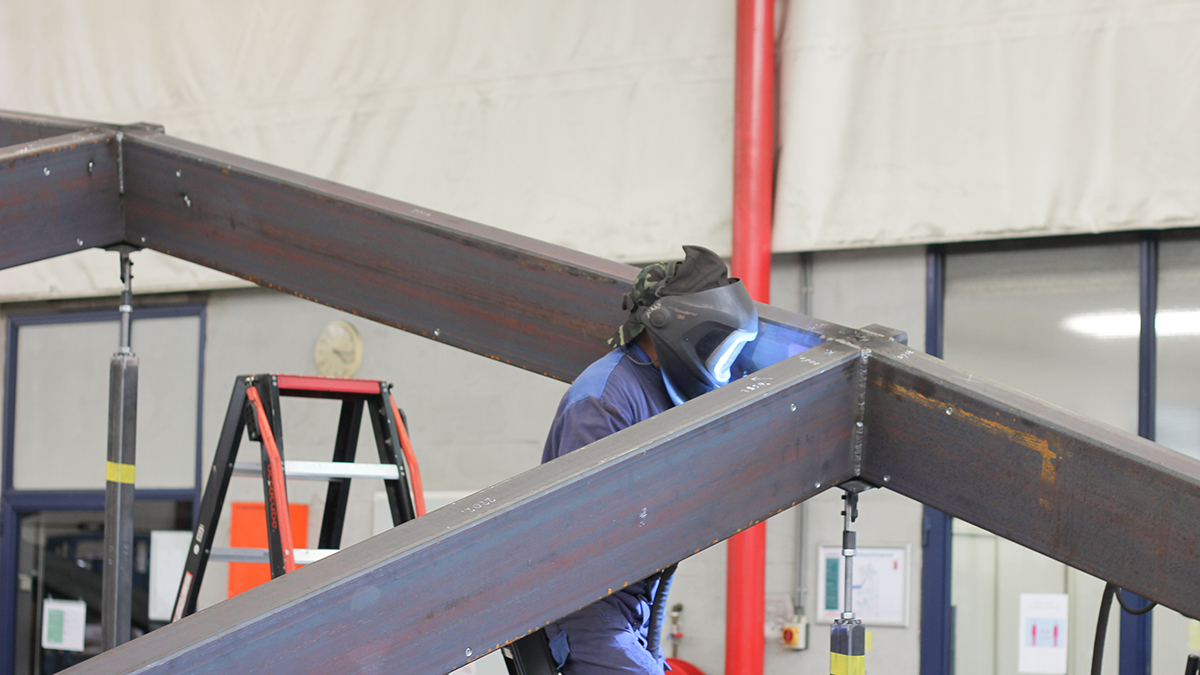 Determining stiffness
Jort Winkel, structural engineer: "My biggest challenge was getting the stiffness under control.” The joints in the structure are not rigid, but also not pinned. The stiffness in between determines how the forces are distributed across the roof and how all connections will look: whether they are strong and stiff enough. Another aspect that we had to take into account was the deformations of the roof. Jort: "We usually make one model, but for this project I made two models to determine the limits. One model represents the lowest limit in stiffness (in which the roof deforms a lot) and the other model the upper limit. Using these two models together I was able to ensure that the construction was structurally sufficient.”

You could see the roof as a colander, in which the edge beam holds the curvature of the roof together. The tree turrets in the roof, however, interrupt the edge – resulting in a loss of stiffness. We therefore use tension rods that keep the gridshell in place. The length and pre-tension of these cables have to be determined very precisely, the forces must correspond with the calculations.

The tension rods consist of several parts that are attached to each other. Deviating a few millimeters already means a different play of forces. The rods are hung vertically on the roof itself, resulting in a loss of stiffness. That’s why we have to tighten them extra tight. These are critical points that we have to overcome before assembly. It is a meticulous, structural game. 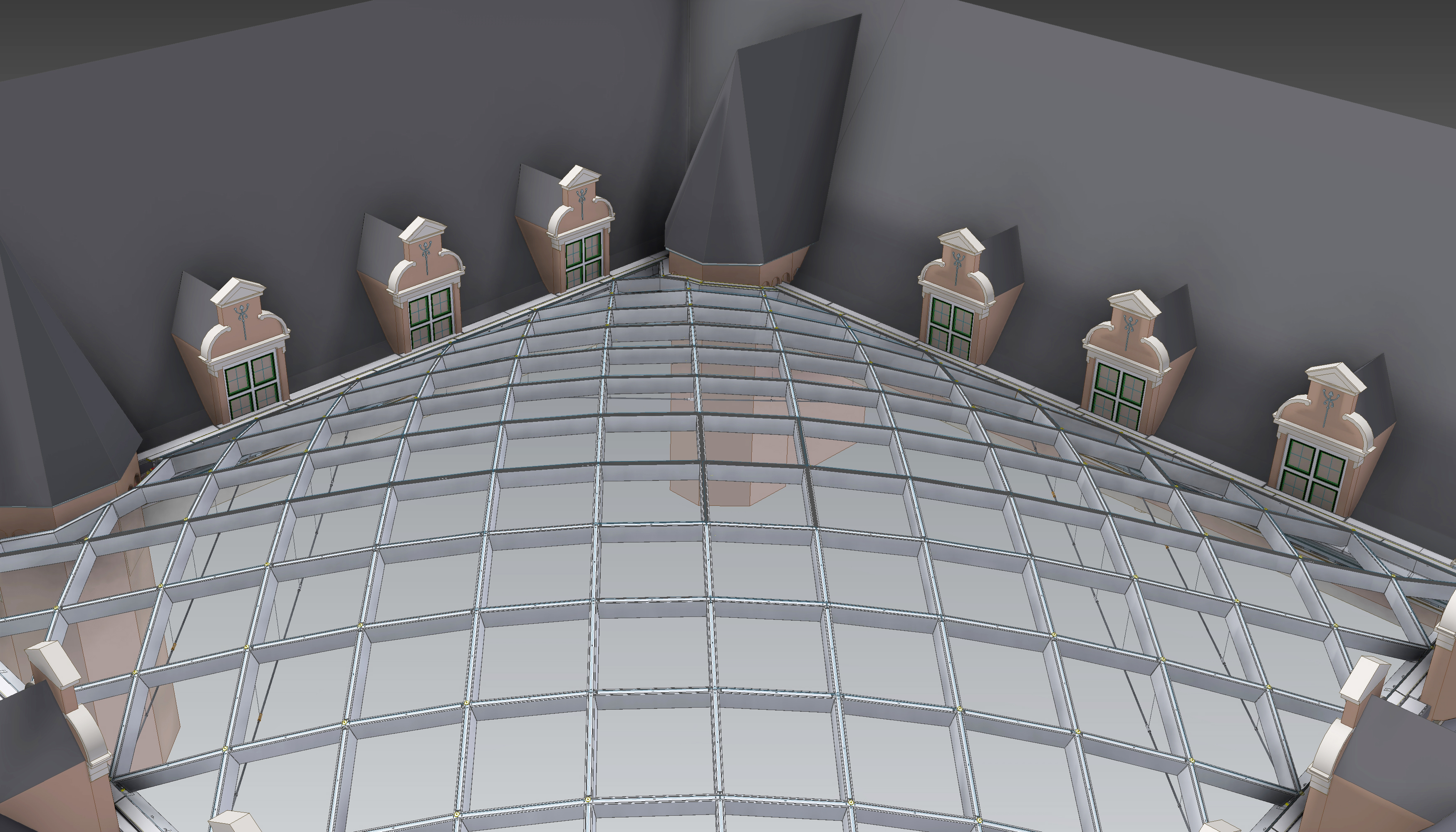 Assembly
Because we cannot transmit horizontal reaction forces perpendicular to the perimeter of the courtyard, the ‘colander’ becomes important. In order to optimize it, it comes down to the order in which we build up the roof. First the edge beams, then the tension rods and from there the corners and frames are built. The ladder frames are divided into different categories.

In the end, a square-shaped void of 21x21 meter remains in the center of the roof. This is something special and another challenge about this gridshell structure. Because the structure can’t rest on the scaffold, the last part works as a reciprocal frame. The four ladder frames support each other and close the roof. To place this last frame we work with two cranes simultaneously.

Integral way of working
While we work on the technical elaboration of the architect’s design, we simultaneously take a few steps forward: which frame size can we produce, how are we going to transport the elements and how should it be hoisted?

Gathering the engineer, structural engineer and the production and assembly team around the table in an early stage, really pays off. It’s a valuable interaction between the various disciplines and it results in an efficient way of working. We optimize the design and thus, for example, the use of materials and time on site. 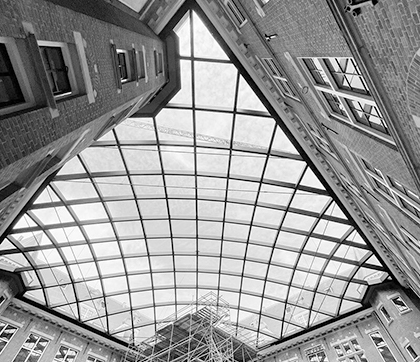