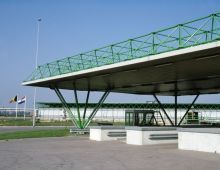 ‘Hard glas’ is Benthem & Crouwel Architecten’s contribution to the ‘Ongewoon Wonen’ (Unusual Living) competition in Almere. This tender was issued by ‘De Fantasie’ comity, and marked the beginning of the self-building tradition in Almere, the youngest city in the Dutch polder.

The temporary house serves a twofold experiment: on the one hand a flexible dwelling structure was build with prefabricated building elements, and on the other hand the house was a test case for other Benthem Crouwel projects such as the customs emplacements.
Octatube was responsible for the steel spaceframes with adjustable supports. Spaceframe structures were very progressive systems at the time. Together with the overall design they well fit in the high-tech movement in architecture.
The glass panels of single toughened glass carry the roof elements of the elevated house, while wind forces are transferred by means of structural glass support fins in the facade. In 1983 this is an early example of the application of glass fins.

The demountable building project was build by the architects Jan Benthem en Mels Crouwel themselves, with the help of colleagues, friends and family.
To build an (experimental) own house in Almere is a lot more common thirty years later. Today it is a project like the Fletcher Hotel that causes more stir, also a collaboration between Benthem Crouwel and Octatube.