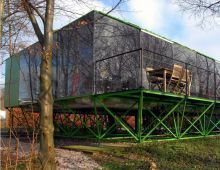 Before the Schengen Agreement was signed among several European countries, the national boundaries were marked by guarded border crossings.
In the eighties, the young architectural firm Benthem and Crouwel was assigned to design several customs emplacements. The aim was to realise recognizable, uniform and flexible structures. The spaceframes that were developed by Octatube proved to be a suitable system for these preconditions and the construction of suspended roofs. The spaceframes were assembled alongside the highway, after which they were hoisted in place. Because of this method of installation, the road only had to be closed for a short duration.
The open structure emphasizes the character of the border passage, according to the architect. The buildings are marked by a recurring green colour. Octatube has realised the steel structure for different border crossings, including Nieuweschans, Oldenzaal and Hazeldonk. The flexible structure made it possible to easily demount and rebuild the buildings elsewhere.