Octatube generally produces their space frames in circular steel tubes, but aluminium, solid timber and even cardboard and bamboo have been successfully used on occasion. The shift in construction philosophy away from a manufacturer-centred and towards a consumer-centred approach has moved the focus from industrial space frame manufacture to special, project-related design. The consequence is that many space frame designs do not fit in with any existing system. A large number of basic systems can certainly be designed, and projects often use a derivative of one of these.

Octatube included a supporting Tuball structure in hot galvanised steel in the new Zuid- en Oostserre glazed atria for the Faculty of Architecture at the Delft University of Technology (2009, to a design by Mick Eekhout).  As well as delivering a lightweight structure, the standard Tuball system used also allowed the design & build project to be completed in just three months, despite severe winter weather conditions. The two new atria are constructed against the existing facade of the university’s brick-built former main building on the Julianalaan in Delft. It dates from the early twentieth century and is renovated by Braaksma & Roos Architects of Den Haag. The steel structural elements are optimally protected against corrosion by a hot galvanising process. The Zuidserre has a floor area of 1500 m 2 , the Oostserre is 900 m 2 . Large-scale activities like the model workshop and studios for students are housed in these atria, which provide light and transparency in an otherwise rather enclosed building.

The Tuball system
Octatube’s Tuball system, developed in 1984, consists of steel nodes in the form of hollow spherical nodes and circular tubes. Plugs with threaded holes are provided in the tubular members, and the spherical nodes are attached to these with bolts. The various components of the system can be manufactured in either steel or aluminium. The Tuball system is highly 'abstract' in its’ appearance. Octatube is still making regular use of the system some 25 years later. A recent example can be seen in the Zuid- & Oostserre as described on the previous page. Thanks to extensive experience with the Tuball system, the atria were constructed at an extremely high tempo during 2009.

The Streamline system
Mick Eekhout first introduced the appropriately named Streamline construction system in his dissertation in 1989, and the system was first employed by Octatube in the dome of the Friesland Bank in Leeuwarden (architect Aad van Tilburg) in 2005. The Streamline system consists of fluidly interwoven horizontal rings and diagonal tubular members. Octatube developed a special variant for this dome, with curving horizontal tubes linked by diagonal tie-rods. The high-grade pre-tensioned bolt connections were thereby completely concealed  from  view. The supporting structure is formed by the triangle of delta-shaped curving members. The dome is suspended from this, somewhat like a bell. The foundations of the structure are located at just three positions between the existing buildings. A 30 x 30 m glazed roof is suspended below the dome. 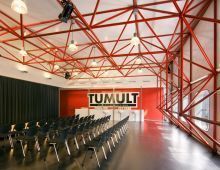 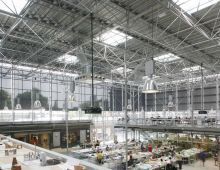