Architect Shigeru Ban is internationally recognized for his cardboard structures. Octatube has collaborated with him several times in the creation of his cardboard tube buildings. Varying from the building of a membrane covered geodesic theatre to a cardboard bridge. Despite the temporary nature of these projects, they continue to be rebuilt and reused at different locations.
Octatube has made great steps in the development of cardboard tube construction in recent years, and we now see a bright future for standardized space frame structures as well as free forms using this material. In both cases it is clear that cardboard must be both more environmentally friendly as well as more economical than steel.

Permanent & Sustainable application
A multifunctional extension for the Ring Pass Hockey & Tennis Club in Delft was completed in 2010. Besides being used by the sports club it is also available for conferences and it houses a school homework club and a childcare facility. The extension makes use of a space frame constructed from cardboard tubes and recycled steel spheres (Tuballs). Steel columns support the cardboard spaceframe With the building of the new extension Octatube has completed the first example of a permanent durable cardboard tube structure. The structure meets all current requirements for permanent buildings.

Continuous improvement
It is important for the lifespan of the cardboard components that the ingress of moisture is prevented. Octatube therefore incorporated a layer of polyethylene just below the outermost layer of cardboard. A rubber sealing gasket was also installed between the tube and its flange. Octatube applied and researched a variety of surface protection treatments to different parts of the Ring Pass building. The building will now be monitored to determine which alternative gives the best results. Octatube is looking for methods that would do away with the requirement for the layer of polyethylene. That would make the tubes simpler to recycle, a major step towards sustainability. A heat shrinkable sleeve around the cardboard tube might provide a separable solution. Test results are promising. 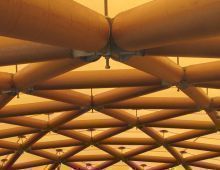 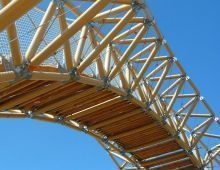 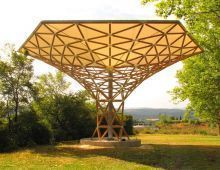 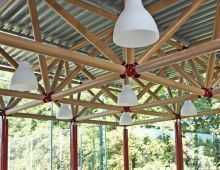