The artwork ‘Bijlmobiel’ – predecessor of the Yellow Wings -  was conceptualized in March 1974 by artist Loes van der Horst and Mick Eekhout. After a process of design and engineering, the collaboration resulted in the realization of the ‘Bijlmobiel’ in 1976. A large piece of art, consisting of pylons, cables and six blue-white polypropylene cablenets.

The artwork was built in a pool in Amsterdam’s Bijlmer district. It was an adventure to build it. A structure that presented itself like an enormous filigree insect on the water. After laying down the foundation in a drained pool, the steel pylons, cable works, cablenets and their tensioning was put in place. Construction proved to be a matter of specialism and dedication. The photo shows a very transparent light-weight artwork, measuring up to the tall flats of the Bijlmermeer: Fleerde and Frissentein. 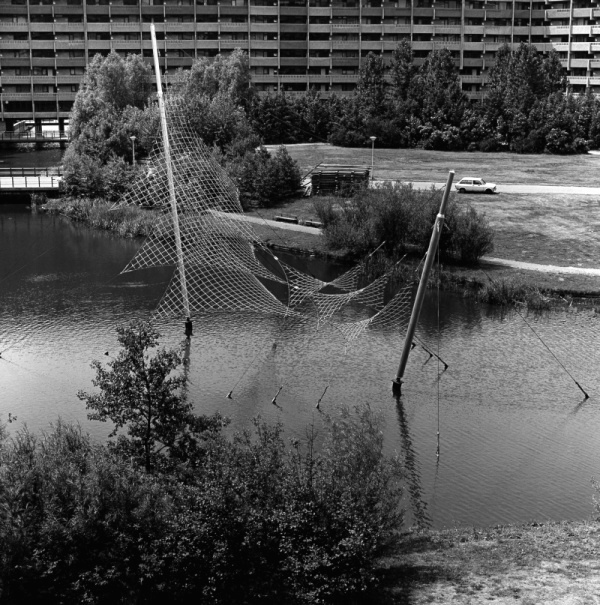 Redesign
In 2011 the municipality took the initiative to find out whether it was possible to rebuild the artwork. The surroundings had changed drastically. In the past 35 years the artwork was renovated once, and eventually disassembled and removed. But there were calls to reinstall the piece of art. The materials were collected and evaluated. The quality of the leftover pylons, steel cables and polypropylene cablenets proofed to be unfit for re-use.
Mick contacts Loes and together they come to the conclusion that a remake would be preferable over a restoration of the Bijlmobiel. A remake, but with an enhanced and future-proof design. Loes (90 years of age) was humbled and surprised: “That I live to see this day”.

In the past 35 years much has changed in both the world of art and building technology. Back then the cables were tied by hand as a kind of manual form finding. Given the fact that the polypropylene cables lasted only fifteen years, the designers wanted to give the remake a much longer lifespan. From experience it seemed better to use coated aluminium strips instead of polypropylene cablenets. Strips are more visible and don’t have to be interconnected as often. By selecting a different material, the shape of the cablenets had to be designed anew. Mick Eekhout and Loes van der Horst adapted a plan for reconstructing the artwork with new materials.

Yellow Wings
The intended new location is a pond situated in-between much lower buildings than the historic residential flats, where many people could see the artwork from above. In the new setting the viewing angle is always horizontal from the shore of the pond looking towards the artwork in the water. One sees the artwork from eye-level. This was one of the reasons to change the appearance of the new design.
In accordance with the previous design one short and one long pylon were set up in the pond. In between the pylons four suspended cables were attached. To these cables overlapping faces were fixed and inter-connected, creating a vivid ensemble of wings. The faces consist of 100mm parallel aluminium strips.

The aluminium strips are coloured yellow, contrasting with the red bricks of the houses surrounding the pond, and with the colour of the sky and the water. The artwork is situated in the central part of the pond.
Meanwhile the new design has been realised. A yellow piece of art in the middle of the pond, named ‘Yellow Wings’. The result is a hovering artwork. The remake structure of the ‘Yellow Wings’ is placed as an insect on the water, just like its predecessor. It appears to be floating and contrasts with its surroundings. Happily against a dark background and comforting in dull weather.