Just above the heads of shoppers Octatube has build wind canopy the Diagonal in the city centre of Almere. The canopy structure for Citymall Almere is part of an ambitious quality improvement plan and fits in the Almere master plan of OMA. Building site nuisance for shop owners and shoppers has been kept to a minimum by means of an enclosed scaffold during construction. This has enabled construction to take place while all shops were fully accessible.

Unibail-Rodamco has appointed Octatube as the main contractor for engineering, producing and installing the second and largest canopy structure of Citymall Almere at the Diagonal. The city canopy is designed by the architects of DunnetCraven and consulting firm Techniker, in collaboration with B+M Den Haag and ABT and DVP. The canopy is approximately 11 meters in height and stands on a ascending street, separate from the surrounding buildings.

The main structure consists 22 columns and a grid of bespoke V-shaped main beams. These V-beams are made from 12 millimeters cold-bent steel plates and also serve as gutters. A secundary grid of rectangular hollow steel sections bring the total steel production at 125 tons, which has been manufactured by Octatube in-house. At the building site the different elements have been joined together to form one large canopy structure of 82 by 24 meters.
The spacing in between the canopy and the existing buildings has been emphasized by cantilevering glass beams at the perimeter of the canopy, making a transparent gesture to the surrounding buildings.With the exception of 4 circular voids the canopy’s steel structure is fully covered with glass panels, fixed to the steel profiles and glass fins by means of clamps. The glass panels have a standard size of 2 by 2 meters and cover an area of more than 1300 square meters.

Lighting is an important feature of the canopy to enhance the atmosphere of the public space at night times. General ambient light is achieved by means of recessed LED spots mounted to the surface of the steel structure. In addition, a band of light is located at the perimeter of the circular openings, giving a visual halo effect.

The large new canopy enhances shopping comfort in Citymall Almere. Besides the reduction of wind nuisance, visitors are also able to enjoy a renewed shopping area. 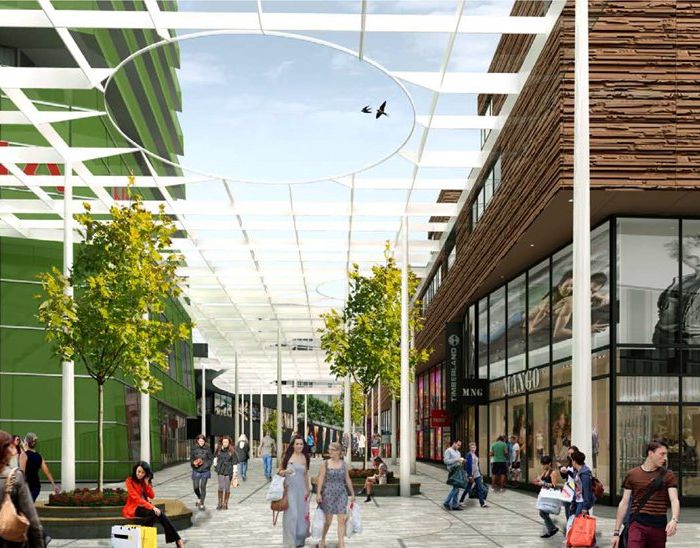