The perfect fit for a glass dome roof

Walking into the giant glass dome roof of the AFAS Experience Center, it is hard not to be impressed. With a diameter of 42m and a height of over 24m the majestic structure covers a theatre that can house up to 850 people. Between the theatre hall and the glass dome enough space is left to fit in a foyer with a capacity of over 625 people. If you count the two floors around the theatre, the capacity increases to over 1000 people.

Octatube was contracted by Just Architects and client AFAS Software to engineer and build the glass dome roof with horizontal lines and triangular glass panels, taking up the full technical development of the design. An interesting structural challenge we enjoyed taking on.

1000 glass panels neatly divided
The most important question we had to answer during the design phase was how to design a structure in which the glass panels are neatly divided over the dome, without any disturbing deviations in the pattern. We started with the largest possible shape: a triangular glass panel of 3.2 meter at the base of the structure. Progressing to the top the panels gradually become smaller, building up the dome with 11 horizontal rings in total. Between ring 9 and 10, the number of glass panels used per ring goes from 48 to 24, preventing the triangular panels becoming too sharp and therefore much more difficult to produce. The steel rings are interconnected with tubes that follow the distribution of the glass panels. This creates a steel construction with a regular distribution of triangles. 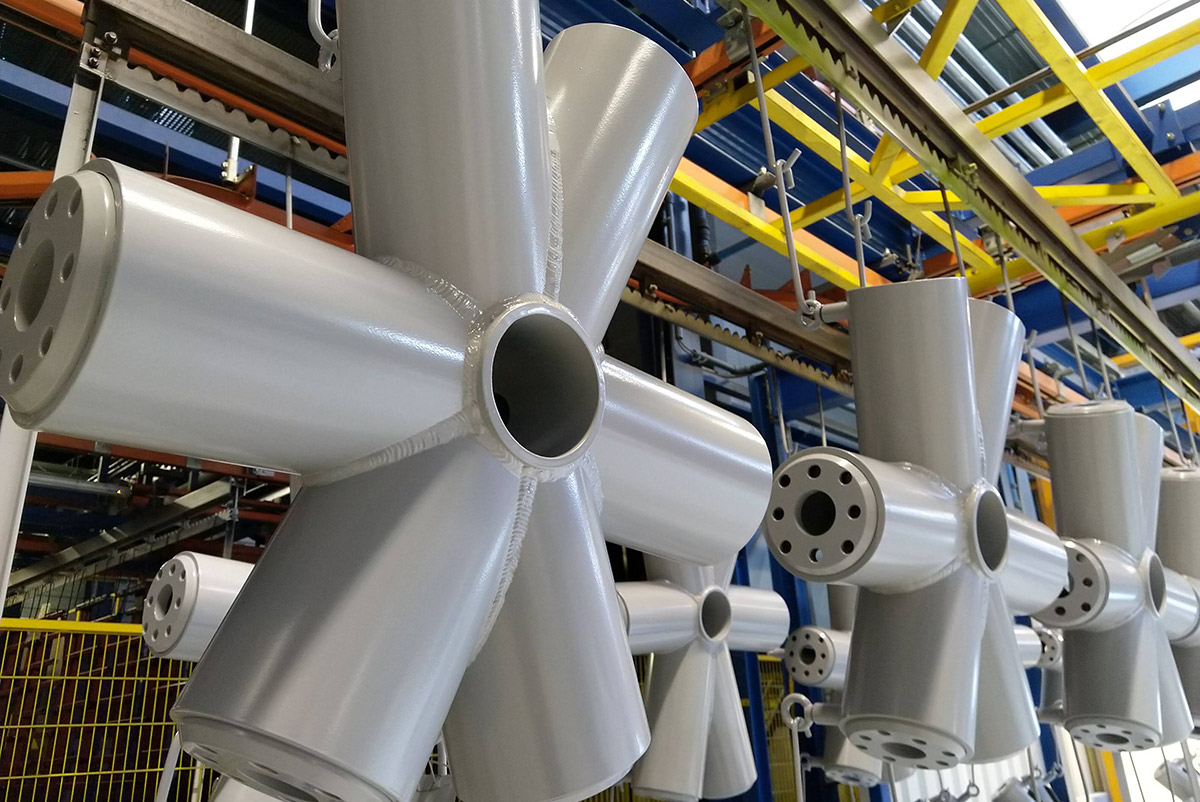 The dome is covered with more than 1000 glass panels, built up out of an inner laminated pane of 2x8 mm, a 16 mm argon-filled spacer and an outer pane of approximately 10 mm thick single safety glass. The first ring is positioned below ground level and stops right above the water surrounding the dome. The glass in this bottom ring has a perforated blue screen print to reduce reflections from the water. From the seventh ring onwards, the glass is provided with a dense screen print in the same blue color. This print serves as sun shading. On the inside, these glass panels are covered with acoustic panels.

Perfect fit of tubes and specially designed nodes
We constructed the dome using hollow steel tubes that follow the division of the glass panels, creating a steel structure with a consistent pattern of triangles. The tubes are connected by beautifully designed nodes. Each node connects six tubes. At the center of the node we designed a short circular tube perpendicular to the node to which the tubes are connected. Integrated in the centerpiece is a light spot that can be rotated individually in every direction, giving the dome a striking appearance in the evening. All the wiring and controllers are placed within the tubes.

But even with this beautifully designed node, there was no certainty that it all would all fit together. That is why we made mock-ups, performed tests and had samples made of the cutting. Restoring deviations would take up a lot of extra time. We therefore paid extra attention to the cutting.

Closing the dome at the top was an exciting moment. The final ring, including six mounted tubes, was placed as one piece into the dome. There was no certainty that the 3 by 3m prefabricated element would fit. A dome only works well structurally once its finished. When there is still a gap at the top, the dome could start leaning inwards as a result of its own weight. We were quite anxious that it would not fit. But fortunately the element fitted perfectly!

Preparation is key
Flexibility and easy handling were starting points. We choose not to use large prefab frames, but to work with separate tubes and nodes that we assembled on site. Where large elements need to be planned because multiple people have to collaborate and a large crane is required, smaller ones provided easier handling and created flexibility. We could do full assembly of the gigantic tubular steel construction on site with only three people: one person operating the crane and the other two mounting elements in place. The dome was built up like a kind of igloo, in 5 days per ring. 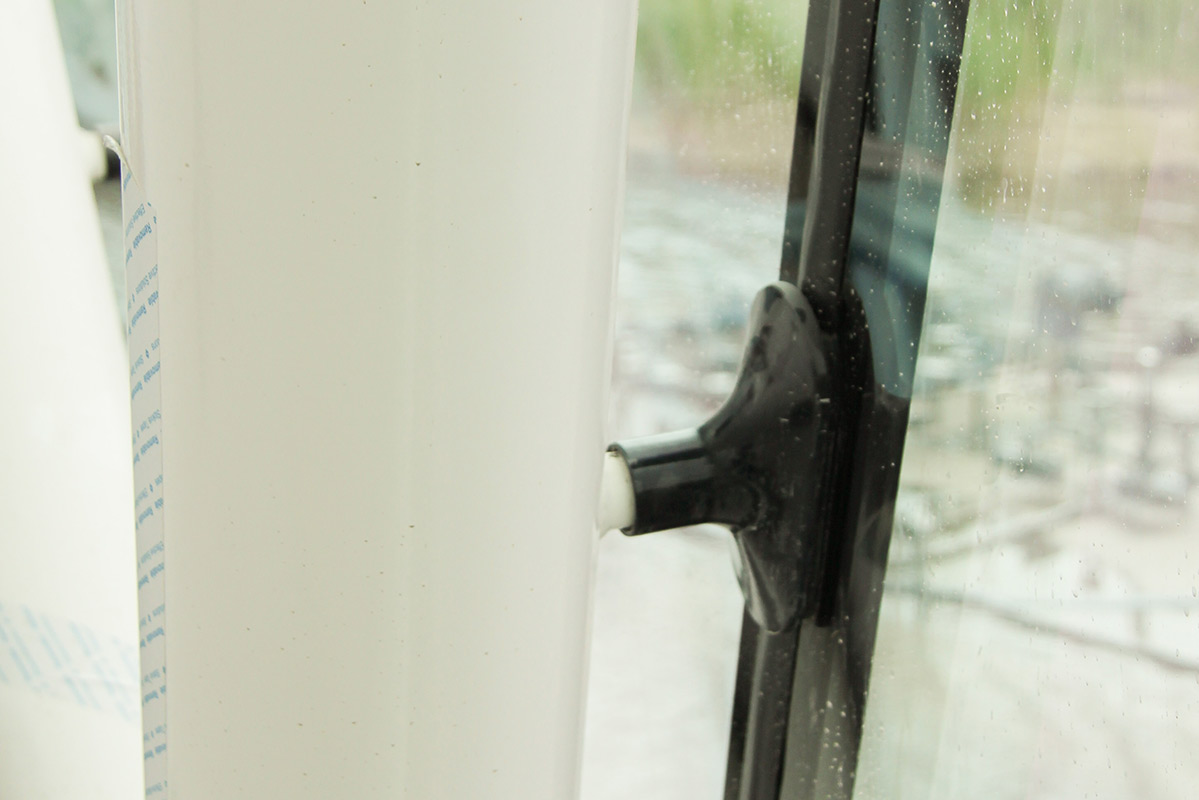 A space of 24 mm is required between the glass panels in order to attach them blindly to the blue supports. De sealing gaskets and spacers closely match the color of the supports. The feet flow over into the sealing gaskets and because everything has the same color it will visually ‘disappear’. From the outside the glass connection is not visible, creating a visually clean dome.

In addition to the supports, we also custom-made the sealing gaskets for an optimal closure of the glass panels.

Challenging bite out of the dome
Although the dome appears to be completely spherical from the outside, there is actually a bite out of it. A sphere is by nature a strong structural shape, but by taking a bite out of it, the structure drastically loses stiffness. Because the dome was not allowed to pull or push against the surrounding structures, we designed a 500 mm diameter edge beam around te connection to the theatre tower in order to redirect the forces from the dome to the floors. This edge beam – and therefore the rest of the dome – is structurally disconnected from the theater tower. The 1m wide dilatation created at the connection is filled with an insulated zinc gutter.

Spherical plain bearings
The dome is connected to the theatre tower at three points of support. Normally the structure is strong enough to sustain itself, but this point of the structure could theoretically be covered with a lot of snow. The supportive points are necessary and provide a vertical force transfer. For this reason the wall thickness of the steel structure around the edge beam is increased as well, from 6 to 12 mm.
The three support points are designed as spherical plain bearings. The two outer supports can move freely horizontally. The middle support, on the other hand, is horizontally restricted in the plane of the tower. It is the fixed point from which the dome can deform due to loads, thermal expansion and shrinkage.
Like the two outer spherical plain bearings, all supports of the steel structure on ground floor level can move perpendicular to the dome center. To prevent damage from the expansion forces on the floor, the dome is structurally disconnected from the floor. An exception forms the large edge beam, which is firmly anchored to the floor and, together with the middle support, creates a fixed framework for the dome.

Architect Steef van der Veldt:
“First of all, I would like to compliment the people of Octatube on the pleasant and professional collaboration we had with them. It may sound logical, but they understand the language of an architect and how to solve something technically and aesthetically in a responsible manner.  For example, the acoustic grid ceilings in the dome and the slender steel structure with integrated lighting. As a result, the experience inside the dome has become pleasant and particularly attractive. Seen from the outside, it really is a glass “sphere”  in which the closed top - we called it the “keppeltje” (kipah) – is indistinguishable. All in all it is high class performance where the end result fully meets our expectations.” 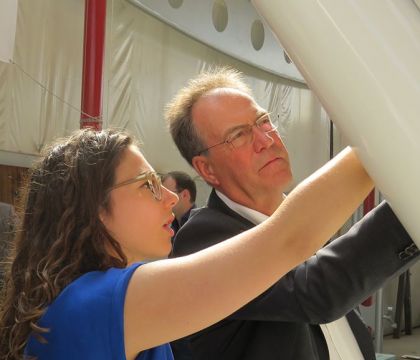 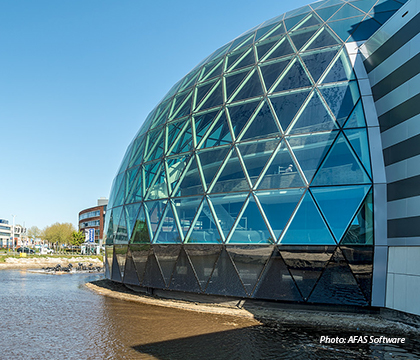